I wish my car could do this…

My head wouldn’t explode if I ever misplaced my iPhone, but I would sure go into a panic.

I found out something this morning that was quite unusual. My allergies have been bothering me the past day or so with a lot of congestion giving me a sore throat. After a Google search for quick remedies, I found out that cayenne peppers are apparently good for sore throats, who would’ve guessed it? Needless to say, I tried adding some cayenne pepper along with honey in my tea, and sure enough 90% of the soreness went away. I would’ve had no idea that a hot pepper would have medical healing applications.

I also went out to buy Fire Emblem: Shadow Dragon for my DS since I need some entertainment during my short downtime in this coming week, and was surprised to see an old friend of mine working at GameStop back from my old church; so we were able to catch up for a few minutes.

But keep me in your thoughts this coming week. I’m finally having my hardware in my shoulder removed this week, and I hope I have a somewhat quick recovery. I wanted to go ahead and get it done before all of the summer activities kick in so I’ll have some recoup time.

I have a confession to make. I’ve fallen in love with the mid-west. There’s something about the vast open country that is so appealing to me. Sure, the southeast has its perks but is nothing compared to places like Colorado, Wyoming, and Washington.

But this brings me to something else that I’ve considered for the past month or so. Considering how dead the market here in Birmingham is for what I want to do, I have even more incentive to considering moving to another part of the country to help improve my opportunities. Aside from my church and family, there really isn’t much incentive for me to stay in Birmingham any longer and maybe a change in environment is really what I need to help push things along in my life.

For many years, I’ve had a set of goals that I wanted to reach by the time I was 25. That time is quickly approaching and I’m hardly any closer to those goals than I was 5 years ago. I’m clearly at a stalemate where I am at right now, and unless something new happens here in the next couple of months I am going to seriously start considering a new location. I still have plenty of time to come to a final decision, as my lease does not end until mid-August.

There’s still a lot of time for things to happen here, but I’m tired of sitting around twiddling my thumbs waiting for some magical event to happen. 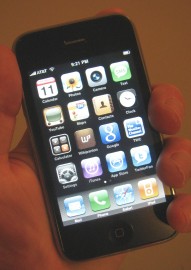 Ever since the iPhone was initially released, I have had my eye on the newest Apple toy. I initially thought that a plan would be too expensive, but found out that since I was already on my parent’s family plan, it would be just as simple as buying the phone and adding the data. Now one week in with my new phone, I wanted to post my thoughts.

One of the nicest things about the iPhone is of course its OS/software. The standard apps included with the phone are of course great, but the App Store is where this phone really shines. There are literally thousands of free and paid apps in the store covering nearly anything that you can imagine. Of course, having internet on the go is quite incredible as well, since I can now check my email or look up the latest movie times. It’s going to be hard to imagine not having this convenience as it was with my old phone. In addition to replacing my phone, I had been planing on replacing my iPod at some point anyway, considering that its battery life was waning.

Needless to say, there are a couple of things there are slightly annoying about the phone. Without some sort of film or protective case over the screen, this thing picks up fingerprints and dirt like you wouldn’t believe it. I also noticed that if you have two events on the same day at the same time, you only receive notifications for the first event.

With that all said, I must admit that I am very happy with my purchase and considering the small amount that I’m paying for it, the plan is well worth it.

My 2 year contract with AT&T finally ran out last month, and I’ve been looking to upgrade my old Sony Ericsson phone as seen on the left. It’s been a decent phone, but has unfortunately had the screen go out several times during the two year period that I’ve owned it.

But I must admit, I really want an iPhone. I’d love to have an iPhone. But the plans alone are at minimum $70/month. I’m not sure if I can use my existing plan and just add data plus the phone, but it is something I need to look into. In addition to having internet on the go, gps capabilities, and the app store, I’ve needed to replace my iPod for quite some time. I could easily kill two birds with one stone; provided that I could get an affordable plan integrated into my existing setup without having to split the line off from my family.

On another note, cell phone plans in general frustrate me for the value that is received in the end, especially with text messaging. AT&T at minimum offers 450 minutes for roughly $40. If I was not already with my parent’s family plan, I would’ve considered using a GoPhone plan, especially considering that I likely use less than 100 minutes a month; if that much. Text messaging infuriates me even more. If you are without a plan, AT&T charges 30 cents per text message received or sent! If you consider that AT&T limits characters to 160 per message, allow 96~ bytes for a header, you’re paying roughly $1,200 per megabyte, just for a simple text message! Even if you have their minimum text messaging plan ($5 for 200 messages), you’ll still be paying roughly $100 per megabyte of data. It certainly can’t cost them that much to send a simple 160 character text message!

I’m not saying that wireless companies shouldn’t be in it to make a profit, it just seems that as I look around at plans that they are more or less taking advantage of the situation and overpricing their services well beyond their value. I just wish something could be done about it, but at the rate plans keep increasing, I’m not sure it will…

O Job, Where Art Thou?

This is something I’ve thought about for a long time, but never really seriously considered it until recently. I’ve been searching for a job for almost a year without any success. I’ve had a few interviews here and there, and a couple of other prospects that unfortunately fell through. The market for what I’m looking for (i.e. web design/development) in Birmingham is just really bad. As a result of this, I’m beginning to seriously considering moving to another part of the country.

I’ve had some time to think about exactly what it is I want to do; I need something that involves more creativity than what I am currently in. When I first signed onto where I am working currently, I never planned for this job to be a long term. I was hoping I could put a year or two under my belt with some experience and move onto something else eventually. Unfortunately, given my search over the past 10 months, I am beginning to get the feeling that Birmingham is just not that place. I am going to need to move somewhere out west.

I’m not 100% on this decision yet, and am still allowing a couple of more months for something to show up here in Birmingham. But the longer I go, the more I feel that I will be unable to continue the work I currently am doing without finding another opportunity and fast. Web design/development comes to mind when I think of what I want to do, but I’m certainly willing to explore other options that are within my interests. If you know of any opportunities that I could possibly look into, please let me know.